White River Fishing Report for the past few days. The weather has been mild so far this winter. We fished the White River for the past three days and found trout fishing to be excellent! Chad landed this huge brown trout (Pictured left) on a tiny micro egg. Trout fishing has been excellent even though the generation has been low. One to two generators were running on most days. It’s down to minimum flows for the winter months. White River levels were low and clear below Bull Shoals Dam.

Fishing the lower end of the riffles seemed to be the most productive for us. Water temperatures are still relatively warm, mid 40’s so trout have been very active. Late December, January and February are primary spawning times for these fish, and have been actively spawning the past few days. These trout usually continue to spawn throughout the winter months, through February.

Our best baits lately have been Power Bait eggs hooked onto a single hook and drifted along the bottom. Eggs flies have also been working well. Smaller eggs flies have been the best although it’s hard to beat the scent from Power Bait.

Both Brown Trout and Rainbows have been hot on the spawn. During certain times of the day, we could see fish actively spawning on the gravel shoals. I personally don’t fish to trout on spawning gravel but fishing behind them has been outstanding! Tons of Rainbows behind the spawning Brown trout. Limits of nice Rainbows.

During the past several weeks, water temperatures have been perfect and trout have been focused on spawning. It’s been a little bit early for winter shad kills so we’ve been spending time fishing above and below the riffles. Spawning fish generally spawn on the lower end of the riffles. Drifting baits into the deeper pools near the shallows. Here’s a bit more information on the White River Fly Fishing in Arkansas. We love it and just love trout fishing here! 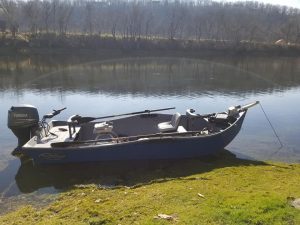